A driverless car has been tested among members of the public for the first time in the UK, in Milton Keynes.

The two-seater electric vehicle travelled in a 1km (0.6-mile) loop on the pavements around the town’s railway station.

The team behind it hopes a fleet of 40 of the pods will be available to the public next year.

It called the test “a landmark step” towards bringing self-driving vehicles to the roads of the UK.

Local dignitaries and members of the press sat alongside a safety driver, who was there to take the car out of autonomous mode in the case of an emergency. 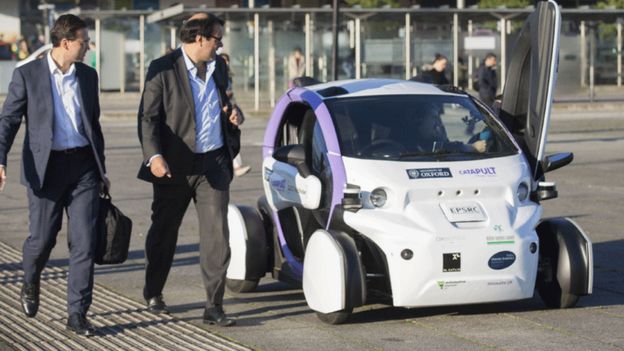 Programme director Neil Fulton said: “This public demonstration represents a major milestone for autonomous vehicles in the UK and the culmination of an extensive project involving UK companies and experts.

“Oxford University’s technology will go on to power automated vehicles around the world, and the project will now feed into a much wider programme of autonomous trials across the UK,” said Mr Fulton.

“Driverless vehicles are coming to Britain, and what we have demonstrated today is a huge step on that journey.”