At around 11pm on the 21st day of December 2016 I get a phone call from my colleague informing me of  how he had been arrested by police while he was on his Way to his home after buying a kilo gram of sugar and soap.
He informs the reason the officers advanced for his arrest was that he didn’t possess an identification card ID at the time which the officer said it was only thing to warrant his release,he requests me to go to his home and tell the wife to avail me with his passport and national identity card which she did.
At that point I rushed and found them on their way to Kilimanyanga police post in zana, area that is under Kampala Metropolitan police south and katwe or kibuye police station as known to many along with  four others, two crime preventers and four police officers, I then approached one of them who I later learnt  was a crime preventer but very drunk, l showed him the ids before asking me whether I know lunyankole and directing me to the uniformed officer who asked me to find them at the post, very bitter and vowing not release him since he hurled insults at them and one of them was telling them that they are looking for Christmas which indeed turned out to be true at the end of the story.
At Kilimanyaga police post I meet the officer in charge, I explained to him and calmly told me to wait until they reach the post. 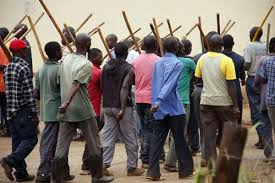 On reaching the post, the officer who vowed not to release tells the one in charge that my colleague said they are looking for Christmas, so even the calm officer turned radical before showing a message on his phone from centenary bank showing a deposit of 200 and plus thousand shillings of his salary and bragging about how he has two wives and 12 children some at makererere and kyambogo university he takes care of adding he doesn’t have to wait for the salary, he went ahead to show me his pocket change amounting to about 60,000 shillings, he too joins his fellows and crime preventers and vowed not to release him until when I learn how to speak well.
Stranded I was, the drunkard crime preventer approaches me and lectures me that I was just wasting my time pleading to them since the only way out was to get them 50,000 shillings to warrant his release, I first resisted and turned my audio recorder on since it was a great story  tell on the other side and prove the world that most of the night operations are aimed at soliciting money from the innocent people they arrest not keeping law and order as they claim.
The crime preventer kept on my neck and at certain moments claiming how he was only doing a good samaritan role adding that he is the superior to the officers around and then how is UPDF soldier who was allocated to over see the security of our territory.
Finally my colleague gives in and tells me to give them 20,000 which he first declined to take after consultations with the officers and infact a disagreement broke out between themselves since some were saying the money was enough while one wanted more but nevertheless they agreed and accepted it and with in two minutes he was left Scot free, this was not different with two of his co-arrested
The only reason as to why gave them that money was because my colleague had an appointment early in the morning which he couldn’t afford to miss.