UEFA Ultimate Team of the Year

By; Denis Kayongo. Eight of the 11 earned the majority of their team of the year spots while playing for either Real Madrid or Barcelona -

It will come as little surprise to learn that Cristiano Ronaldo, the Champions League's all-time top scorer, has made the team more times than anyone else with 14.

No prizes for guessing second-place either - that would be Lionel Messi.

Eight of the 11 earned the majority of their team of the year spots while playing for either Real Madrid or Barcelona - again, no surprise, given how dominant those sides have been over the rest of Europe since the turn of the century. 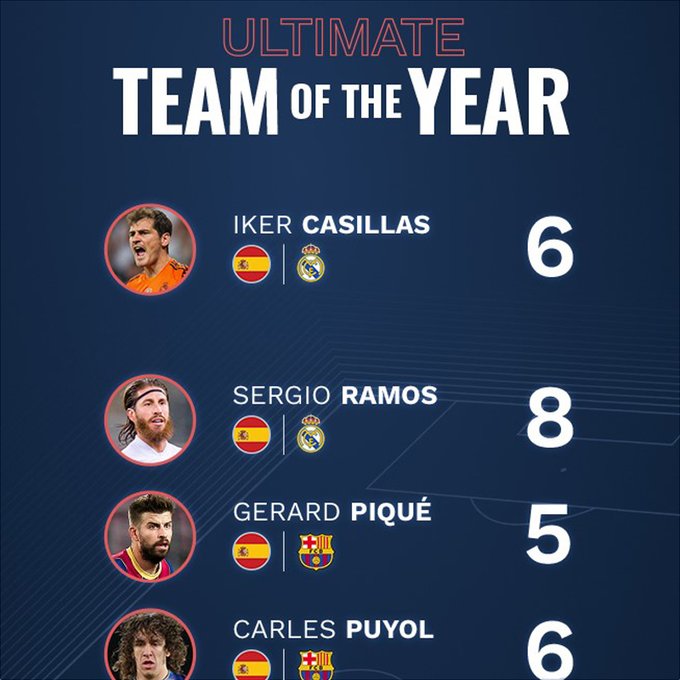 Steven Gerrard makes the midfield with the fewest TOTY awards (3) of anyone on the pitch, while there is some recognition for Bayern Munich legend Philipp Lahm, who made the XI five times over the course of his storied career

Thierry Henry was a fixture of the team throughout his Arsenal career, making the grade five times in the six years between 2001 and 2006, though he didn't actually make it as a Barcelona player despite scoring 49 times in 121 appearances for the Spanish side.

UEFA Ultimate Team of the Year